After spending last weekend in the woods and sighting some interesting mushrooms, I was in the store this week and picked up some portabella mushrooms to use in a variety of culinary experiments.

Historically, my household has been a mushroom-free zone, but horizons are being expanded.  I’ve had portabellas in catered and restaurant settings which I really enjoyed, but have never been able to replicate it.  That is where the challenge lies… using these 6 mushrooms in a tasty manner!

Not only have I not been able to replicate the delicious meals I’ve had, I’ve been somewhat intimidated by the mushroom itself.  It’s got gills–not something we see outside of fish!  That intimidation factor was dismantled after reading this post.  Now it’s time to cook!

With the unknown conquered, it was time to search for my first mushroom target. After browsing the internet, the target was identified as Portabella Mushroom Soup–a perfect starter which features the flavoring of the mushroom void of the texture.  As I write this, I’m sitting here enjoying this delicious soup on a chilly August night in Maine.  (Yes, it’s in the 60’s here much to the dismay of my family and friends in the Midwest right now!) This soup is flavorful, creamy and definitely one to repeat.  I would even go so far as to say that those who don’t like mushrooms would like this!

The recipe I found would make a bowl about 6-7 bowls, but I halved it for my own consumption this evening.  Also note, this recipe calls for a whole bay leaf.  I only had crushed bay leaves and forgot to put them in a bouquet before putting them into the soup… unless you want to pick bay leaf pieces out as you eat, I’d suggest using whole or a bouquet 🙂

Below is my take on Kitchme.com’s Portabella Mushroom Soup. 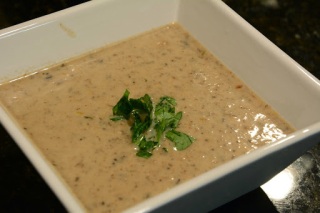 2T Unsalted Butter
1 Leek, using the white and light green parts, halved lengthwise and thinly sliced
1/2 Onion, chopped
1 1/2 Portabella Mushrooms, gilled and chopped
1 1/2 T Flour
3/4 tsp Dried Thyme
1/2 Bay leaf (or equivalent crushed and tied in a kitchen bouquet)
3 C Chicken Broth
1/2 tsp. Salt
1/2 tsp Sugar
1/2 tsp Ground Black Pepper
1/2 C Heavy Cream
Fresh Parsley, chopped–optional garnish
1.   Saute leeks and onions in butter over med heat until tender–about 2-3 min.
2. Lower heat and add mushrooms.  Cover and cook about 10 minutes–stirring occasionally.
3.  Raise heat to medium again and add flour.  Let cook another 2-3 minutes.
4.  Add thyme, bay leaf, sugar, salt, pepper and broth.
5.  Simmer, partially covered, for about 10 minutes.
6.  Remove from heat and let stand for 2-3 minutes.  Then use immersion blender to puree the mixture.  (Careful, this is still hot and do not remove the blender while running to avoid splashes of hot soup!)
7.  Return pan to low heat and add cream.
8.  Heat mixture through and serve.  (Do not boil the soup!)
This version makes about 3 bowls of soup.  Perfect for 2 with enough for dinner and a lunch the next day!  Store in an airtight container overnight in the refrigerator.

Stay tuned for my next adventure in the land of mushrooms!

This site uses Akismet to reduce spam. Learn how your comment data is processed.